BRAVE opens in Theaters today. My thoughts on the screening.

Last night I went to the movie theater for the Screening of the new movie from Disney Pixar BRAVE.  I waited in line with many eager patrons. Luckily the theater allowed us to line up inside and not stay outside in the 100 degree weather.  I was glad for that.

We eventually filled the theater seats and waited for the movie to begin. It did start about a half hour after the time it was scheduled for. It was already 7:30 PM. 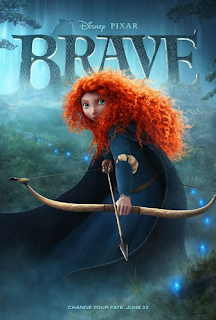 OK, so the movie began!  We had our 3D glasses on! The main character-Merida is the daughter of the Queen. She has a head of red hair that is full of fluff and curls.  She has three little brothers, also red heads,  that get into all kinds of trouble through out the movie. but prove to be at her side when she needs them to help her.

Her father gives her a Bow and Arrow for her birthday. She loves to head out into the woods and practice on her day off from being a princess.
Merida has her own thoughts of becoming the next Queen, she is skilled with her bow and arrow and can ride a horse through the woods like lightning. You'll have to see the movie to find out how important her skills are in the time of need.

The film has great music and lots of humor scenes. You might want to look over the glossary before you buy your ticket to the film, because there are a handful of words you might not be familiar with!

BRAVE shows us how Mother's want the best for their daughter's, but daughter's may not want to go that path.  There is conflict, there is resolution and there is love in BRAVE.

It's a great Summer Movie!

Disclosure: I was invited to the screening of Brave in order to write this review. The comments and views are my own.
at June 22, 2012