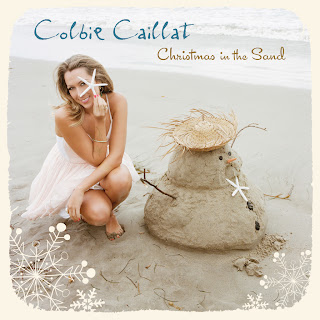 California songstress Colbie Caillat has released the title track of her upcoming album Christmas In The Sand, out on Oct. 23 on Universal Republic.

"I was thinking, what do they listen to over here at Christmas time? I bet they don't always want to hear songs about white Christmases and bundling up 'cause it's cold outside," she told Billboard. "They want to have a holiday song they can relate to."

You can listen to her music on this sound cloud. (FREE) You'll love her fresh sounding voice. This is a really cute song! go ahead and check it out!
It's good, right! I find it refreshing to have a new Christmas song, I do love the old favorites, but this one is really good.

“I have so many warm and sunny memories of Christmas, literally and figuratively. Christmas means family, tradition, and the spirit of  giving and sharing, but when you grow up in California, it can also mean  sunshine and a beach day!” says Colbie. “I wanted to share all these  wonderful feelings with my fans. It’s an album I’ve always wanted to  make and was it was more gratifying having made it with my dad.”

When Colbie returned from Bali and before heading out on the road for  her hugely successful co-head lining summer tour with DeGraw, she and her  father, recorded CHRISTMAS IN THE SAND at The Village recording studio  in Los Angeles.

Caillat’s first album COCO debuted at No. 5 and raced its way past the  multi-Platinum barrier. Her first single, Bubbly, caught a generation’s  imagination and has become one of the best-selling digital tracks of all  time. Billboard took note by naming Caillat its Break through Artist of  the Year.
Her second album BREAKTHROUGH broke at No. 1 and was honored  with two Grammy nominations; that same year, Colbie won two Grammys for  her collaborations with Jason Mraz and Taylor Swift.

Her most recent album ALL OF YOU netted Callait her sixth platinum
single in Brighter Than the Sun and a gold single for “I Do”. It was
Album of the Week at the NY Post and received rave reviews, with People
magazine saying it ‘brings on the glow of Summer. Brighter Than the
Sun was featured more than 20 film, tv shows and commercials. Caillat
and her original music were featured in the Cotton campaign. She also
wrote and arranged ABC Family Channel’s “25 Days of Christmas,” two
years ago.

Her embrace has stretched to include work for honorable causes including the Surfrider Foundation, Save the Music, Animal Sanctuary, the Humane Society of the U.S.

Disclosure: The comments and views are my own. Information provide by Sneak Attack Media.