Review of "The Hobbit: An Unexpected Journey" Opens in theaters today!

Tuesday night I went to the  screening of: The Hobbit: An Unexpected Journey. Whoo Hoo! The boook-Hobbit was written in 1937 by J.R.R.Tolkien, and now you can watch it in theaters starting today. 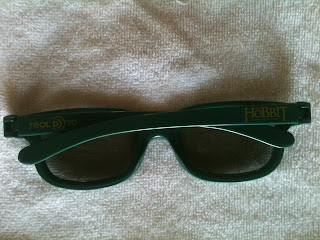 My oldest daughter came along with me to the movie. We watched the film in IMAX 3D with these cool glasses, and it was spectacular!!! 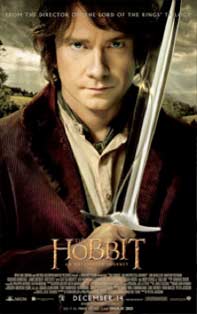 The beginning of the film is very fast paced with battles and such. I was glad to get to the scene of  hobbit's house where Baggins lives in comfort and plenty.  The whole time I was watching the film I kept watching for good to triumph over bad. I think that is why we watch movies-to see the good win in the end.

I was amazed at the costumes, characters, scenes, and animals. It's incredible. I have no doubt this film will be packed this weekend. It opens today in theaters!

The film shows Bilbo Baggins (Martin Freeman) as an older man, then he begins to tell his story to Frodo (Elijah wood). It's a flashback to when wizard Gandalf (Ian McKellen) pays Bilbo a visit at his home in his younger days. After a brief visit the wizard leaves, and Baggins seems relieved he has left.

Just as he is about to start eating his dinner, there is a knock at the door and  the dwarves come to visit him and totally disrupt his dinner time and home.  They ask them to join them on taking back Lonely Mountain. At this point Gandalf gives Thorin the key to the door of Lonely Mountain-no one knew he had the key until now.

Bilbo states he does not wish to embark on the journey with the dwarves, and goes to bed. When he awakes in the morning he is delighted to find the dwarves have left his home and left as clean as when they got there.

Bilbo realizes he does want to go on the journey at this point.  He is running to catch the group, as he is leaving the village he yells out to his neighbors, I am going on an adventure!  That's one of those lines that make the movie. so powerful.

The wizard tells Bilbo: Home is behind you, the world is in front of you. That's another perfect line.

There are characters that are gigantic and a bit gross, and some that are very small. It is an amazing film with scenery lush and lovely and other scenes you might want to take a priest with you. Watching it in IMAX 3D is like you are there with the cast, I was hoping not to become part of the movie!

My vote is two thumbs up film. It's not for kids in my opinion. It's rated PG-13. It is a bit long, running time is 169 minutes, almost three hours. Sit down, relax and as they say, enjoy the show. Don't forget to pick up your 3D glasses on the way to your seat.

As for the adventure Bilbo is going on, is with the dwarves-led by Thorin Oakenshield where they go through Middle earth and encounter  Goblins, Orcs,Wargs, and Sorcerers on their way to Lonely Mountain.

Want to see more: go to the web site: www.thehobbit.com and visit them on Facebook for tons more photos, info, and cast. Check out this video: