You know that part of a DVD that prompts you to select play, scenes, bonus, set up while bits of the movie play? I did not get past that for several plays through the song "Do you hear the people sing" with  people of France waving their flag, and singing about they will not be slaves again.  The song is so moving, so powerful. It can stir up your the strength within your soul, it can remind you of the freedom of being an American, and it can bring you to tears of sadness, happiness, and joy. 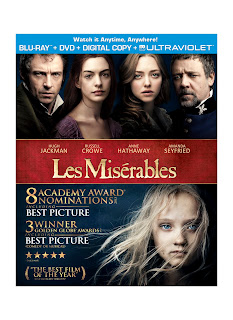 Now on to select play: I saw Les Misérables at the preview screening last year and was captivated, motionless in my seat. The DVD has the same effect. You'll be taken back to another place, another time. The cast is perfect, the singing is moving, and the scenery is real old world "Paris".

As I watched Les Misérables it's a reminder to myself, a wake up call for us all to be humble, be better. To forgive each other, let go of our egos, help each other at times of need, and strengthen the faith within our being.  What a life these people lived, poverty, hunger, lack of shelter and clothing. Yet, they strive to keep on, hoping, having faith there is a better life. It's about their lives and what they think God would want them to do. The reality of this is that people do still live in harsh conditions.

The film as 8 Academy Award Nominations, winner of three Academy Awards. The people have showed their approval of the film, but what you need to do is watch the movie and see what speaks to you. You won't get off your couch or comfy chair at the end of the film and feel one emotion like, wow, that was good, or that had a good story. It's so much more than that. It covers a mother's love and her humble actions to protect her child, a man that moves on from poverty to power, selfless love, people that are the bottom of their sadness, but continue to strive on. 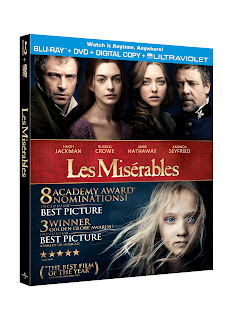 Synopsis:
It is an utterly enthralling story of forgiveness, self-sacrifice, redemption and hope set in 19th-century France about an ex-prisoner, Jean Valjean (Hugh Jackman), who is hunted for decades by a ruthless policeman Javert (Russell Crowe) after he breaks parole. The most striking aspect of this incredible film is that both the protagonist and antagonist are faithful Christians.
You can watch the trailer and read more about the film here:http://www.lesmiserablesfilm.com/.
LES MISÉRABLES provides a real-life look at the paths we choose in life, the decisions we make, and how the steep, narrow, uphill path points toward ultimate fulfillment. It shows how our human choices often conflict with God’s plan for our lives but how when we surrender to divine providence we can be confident that things will work out in the end. The story is so emotionally engaging and packed with Christian meaning, in fact, that at times you will not believe your eyes.
Both Valjean, through a major conversion initiated by a model priest, and Javert, another faithful Christian who prays to do God’s will, commit their lives to doing God’s will as they see it. But one operates with love while the other cares only about the letter of the law. One represents Peter and the other Judas Iscariot in that both betray Christ but one chooses repentance while the other chooses despair. And all of this operatic drama is performed against the most stirring soundtrack ever recorded live on a film set.
The combo pack comes with a bonus tab. Don't miss that section of the combo pack. You can get to know the stars a bit better, see how " Paris" was built, The original Masterwork: Victor Hugos's Les Misérables, and Feature Commentary with Director Tom Hopper.

The Combo pack is Blu-Ray, DVD, Digital Copy and Ultraviolet.  Instantly stream and download, watch it anytime, from your tablet, smart phone, computer, or television. Take it on the go, or watch it on your TV. It's all included in the combo pack. Look for it March 22, 2013 and bring one home to watch over your Easter Break or have a movie night with your family and friends. Instructions are included in the pack for your digital download and Ultraviolet copy.

find them on the web: www.lesmierablesfilm.com
find them on facebook: https://www.facebook.com/#!/LesMisMovie?fref=ts

Giveaway is now Closed winners noted in the comments  I have Three copies of Les Miserables on Blu Ray DVD combo pack to giveaway! Leave a comment on this post telling me why you would like a combo pack. You have until April 4, 2013 at 12 midnight EST  to leave comments. Winner will be chosen by random.org. You can leave separate comments for any shares you do.  Please be sure I can find your email to contact you if you win. Three winners will be sent one combo pack. Open to residents of contiguous USA. Must have valid street address. No PO boxes.

Disclosure: I received a screener copy of Les Misérables from Universal Studios for this review. The comments and views are my own.