SAVING MR. BANKS. As done by Mr. Walt Disney. My thoughts on the movie.

Let's just get this out of the way-if you read nothing else of this post, read this:

I loved every single second of Saving Mr. Banks. 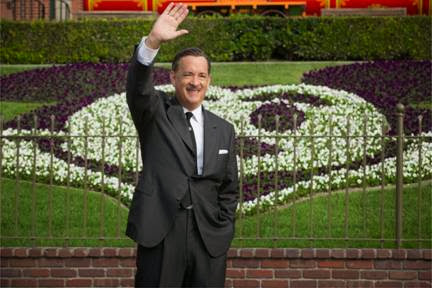 All the actors in Saving Mr. Banks are amazing. Tom Hanks and Emma Thomson make you feel like they are the real Walt Disney and P.L. Travers.  Colin Farrell is Travers Goff and Paul Giamatti as Ralph. Outstanding performances by the entire cast.

The song writers are fantastic-who doesn't love the song- Let's go Fly a Kite. That song could get anyone tapping their feet. 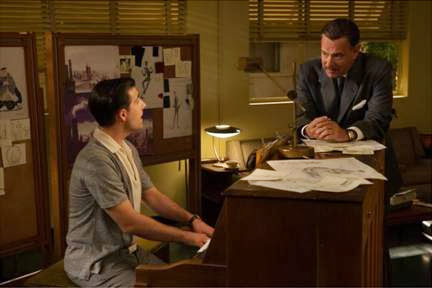 With the help of Walt Disney Studios writers and staff P.L.Travers allows the book to become a movie, at least until she walks out on the writing process.

We see P.L.Travers as a formal, picky woman, always trying to be right and proper. She doesn't let her guard down-until we see her dancing.  Why is she so stubborn? What has made her single, almost broke, and unhappy? We see parts of her childhood, the happy times with her father, the sad times of his illness, and the Aunt that comes to make him well. She holds onto those memories, but seems to dwell on the sad memories. Walt Disney brings out the happiness that is buried so deep within her soul. How does he do this? 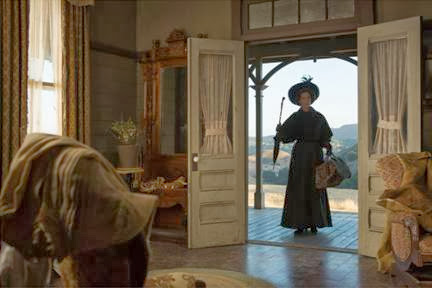 To see how much Walt Disney loves people is heartwarming, wow, you just can't not love him. I always think of Walt Disney as a company, but in this film I saw him as a man, a father, and a very patient, humble person.

Soon after P.L.Travers cancels production of the film and returns home to England, Mr. Walt Disney arrives at her home to ask her to continue with the making of the film. He shares the story of his childhood and they way he remembers it, not necessarily the way it was-perhaps choosing to look past the unhappy times. Finally,  Miss Travers agrees to let her story, Mary Poppins finally become a film. I think she learns how to show love from Walt Disney. His passion for bringing happiness to children applies to adults too.

So, just how does Walt Disney save Mr. Banks???
Holy cow, I'm not going to giveaway the ending!!!

Should you take the kids, I'd say probably not. It's more of an adult film since there are some scenes of the unhappy dad and such. I'd go see it again. It's one of those movies you'll be thinking about for a long time to come.

read below for the official film summary.


OFFICIAL BOILERPLATE
Two-time Academy Award®–winner Emma Thompson and fellow double Oscar®-winner Tom Hanks topline Disney’s “Saving Mr. Banks,” inspired by the extraordinary, untold backstory of how Disney’s classic “Mary Poppins” made it to the screen.
When Walt Disney’s daughters begged him to make a movie of their favorite book, P.L. Travers’ “Mary Poppins,” he made them a promise—one that he didn’t realize would take 20 years to keep. In his quest to obtain the rights, Walt comes up against a curmudgeonly, uncompromising writer who has absolutely no intention of letting her beloved magical nanny get mauled by the Hollywood machine. But, as the books stop selling and money grows short, Travers reluctantly agrees to go to Los Angeles to hear Disney’s plans for the adaptation.
For those two short weeks in 1961, Walt Disney pulls out all the stops. Armed with imaginative storyboards and chirpy songs from the talented Sherman brothers, Walt launches an all-out onslaught on P.L. Travers, but the prickly author doesn’t budge.  He soon begins to watch helplessly as Travers becomes increasingly immovable and the rights begin to move further away from his grasp.
It is only when he reaches into his own childhood that Walt discovers the truth about the ghosts that haunt her, and together they set Mary Poppins free to ultimately make one of the most endearing films in cinematic history.

Disclosure:
I was invited to the screening of Saving Mr. Banks. The comments and views are my own.
at December 16, 2013