The writer/director, Richard Krauss and star Vanessa Hudgens spent time in a shelter to learn more about the lives of homeless pregnant teens. The girls in this film are from the shelter are actual residents not actors. Vanessa Hudgens lived with them for weeks.

Even though I watched the trailer and read the synopsis before I saw the film. I came home to my own cozy warm house feeling colder than the bitter cold outside. 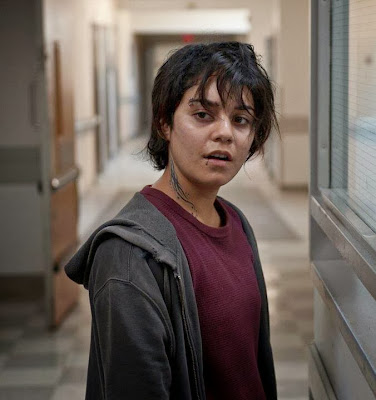 Gimme Shelter is just that, Apple (Vanessa Hudgens) is trying to get away from the broken family life, the cold, the hunger, and abuse. We watched Apple trying to get out of the apartment building while her mother (Rosairo Dawson) holds her back. She escapes with the clothing on her body and a few dollars for a cab ride. She has an address  of someone she thinks will give her shelter and that is where she is planning to stay. 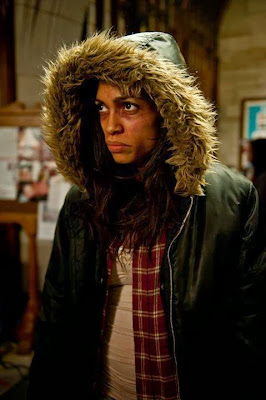 Apple does not get the shelter of a cab ride to the address. She doesn't even get shelter at the address, which is her father's (Brendan Frasier) home.  He gives her food and drink, and cash to go elsewhere for shelter. She asks to stay with him until she can get a job and earn enough money to live on her own. He has a wife and two children that do not welcome her. 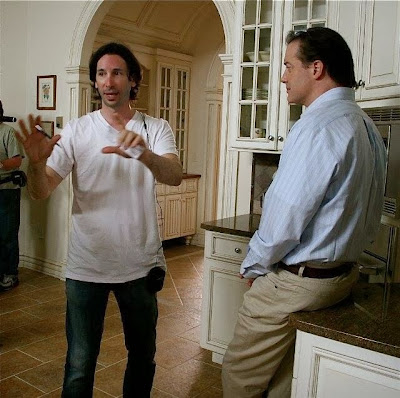 Back out on the street she looks for shelter again. She finds an unlocked car on the street where she stays for the night.  After she steals a different car and has an accident, Apple is in the hospital where a priest (James Earl Jones) tries to talk to her and help. Apple is very hurt and angry and will not let anyone in to her life. She does not trust anyone. Who could blame her after leaving her drug addicted mother and being sent away by her father. 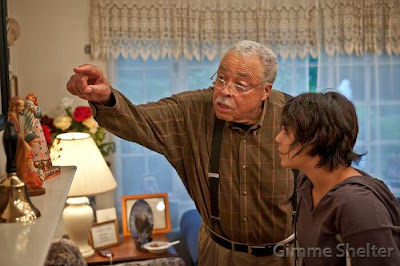 Not only is Apple homeless, she is a pregnant unmarried teen.
The priest finds a shelter for pregnant and new mothers run by Kathy (Ann Dowd). Apple's mother wants her to return home and she threatens the shelter with kidnapping since Apple is a minor. Trying to avoid a police visit the shelter must let Apple leave with her mother.

This film is inspired by actual events in real life. Most of us probably only on see life like this on television or in a film such as Gimme Shelter. There are three basic things we need to survive: food, water, and shelter. We need all three, not just one of the three. Apple doesn't have any of these. Her clothing is torn and tattered, she eats out of trash bags, and she sleeps in unlocked cars. Can you imagine living like this. I'd say it is barely surviving.

Back in the comfort of my own home after the film, thanking God for what I have and praying for those in need, I'll be looking at my overflowing closets of clothing and sharing them with those in need.

Why should you and I make donations to shelters such as the one in the film? You might think these women can help themselves or they made their life this way, but their family life is broken. Where would you or I go if we did not have a supportive family and ways and means?

Gimme Shelter is a film where there is no romance, no happy family in a big comfy house, or evil being won over by good. It's a film that is true to life, true to a city or town you live in, and a true reason why shelter is basic to survival.

SYNOPSIS
"Based on a true story, GIMME SHELTER is the story of a young girl named Apple (Vanessa Hudgens) who, after running away from an abusive home environment, moves in with her wealthy, wall street father (Brendan Frasier). Soon after moving in to her new home, Apple discovers that she is with child. After being given a grim ultimatum by her father, Apple runs away and is almost killed before being saved by a kind priest (James Earl Jones) who gives her chance at the life - and the family - she never knew could be hers."

Disclosure: I received a press pass for the screening of Gimme Shelter. The comments and views are my own.
at January 24, 2014
Email ThisBlogThis!Share to TwitterShare to FacebookShare to Pinterest
Labels: Ann Dowd, Brendan Frasier, Gimme Shelter, James Earl Jones, Rosario Dawson, Vanessa Hudgens