Keep you and your guests in play during the Super Bowl with these 4 simple food safety steps.

January 28, 2014
Super Bowl Sunday is getting closer! Are you ready for the big game? Whether you are having a party of five or a party of 50 follow food safety tips from foodsafety.gov.  Even if it's just yourself snuggled up on the couch watching the super bowl, play it safe and remember these steps:
Four Simple Steps for Food Safety:
Four basic actions to do along with the 4 simple steps to food safety:
read more here: FoodSafety.gov
Martie Duncan and Rebel Chef Terry French  have partnered with the USDA and the Ad Council’s Food Safe Families campaign to remind us of food safety at game time.
Rebel Chef Terry French, winner of Food Network’s Extreme Chef and Owner of Culinary Dreams shows us recipes from his travels around the world with the bests ingredients and food safety in mind.
See what Martie Duncan of MartieKnowsParties.com and Season 8 of Food Network Star is cooking for Super Bowl Sunday: 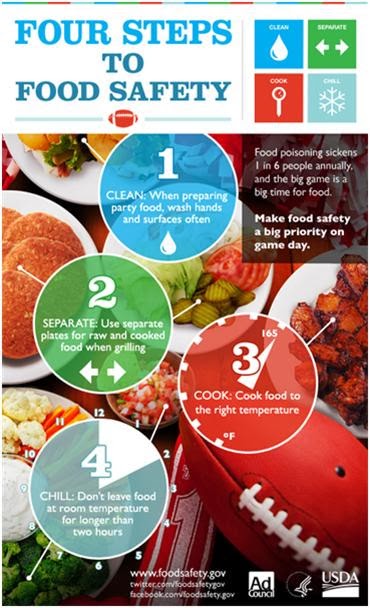 Things I've learned from having parties:
Good Luck and I hope your team wins!