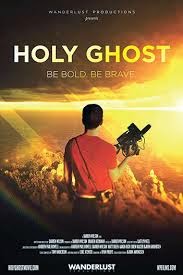 Holy Ghost DVD is a documentary film from director Darren Wilson. His director roles are found in of films such as Finger of God, Furious Love, and Father of Lights.

I enjoyed  watching the DVD and seeing the adventure, travel, and faith of the world in action. It's a great film for your family to watch, share at Church, youth group, or just a bunch of friends.

The film is a insight into life, earth, places, people, and adventure. The film takes the viewer to Monte Carlo, a heavy metal concert, the oldest city in the world, and many more exciting places and events.

This film is about taking a risk. The risk that let's the story tellers travel the world, see what people do all day and night and share it with us, the viewer.

This film is about making God famous. It's a simple statement, but so powerful because he is famous world wide. Watch and see!!!

Be sure to visit the official website for tour dates and more info.
Stay up to date on their facebook page
On September 6th, Wanderlust Productions will host the FREE worldwide premiere of the film at this site —> HolyGhostMovie.com

For your chance to win the DVD HOLY GHOST, enter the rafflecopter below. only one entrant per mailing address, per giveaway. If you have won the same prize on another blog, you are not eligible to win it again. Winner is subject to eligibility verification.


"Disclosure (in accordance with the FTC’s 16 CFR, Part 255: “Guides Concerning the Use of Endorsements and Testimonials in Advertising”): Many thanks to Propeller Consulting, LLC for providing this prize for the giveaway. Choice of winners and opinions are 100% my own and NOT influenced by monetary compensation. I did receive a sample of the product in exchange for this review and post.
Only one entrant per mailing address, per giveaway. If you have won the same prize on another blog, you are not eligible to win it again. Winner is subject to eligibility verification.”
at August 28, 2014