The film, Aloha is in theaters now!
The soundtrack from the film, Songs of Aloha is in stores now!
The chance to win a copy of the Soundtrack is here!

Start your Summer off with the 19 track collection Songs of Aloha. Take yourself on a "vacation"! Feel the warm breeze of the ocean, the mist of the forest, the sunshine, sip refreshing beverages, and hang out at the beach night life parties that are so inviting.

An introduction to the idea of the film and the selection to the soundtrack is included in the CD booklet. It's written by Academy Award winner and executive producer of the film Cameron Crowe.
It's a very interesting read on how and why this story is told, the people and land of Hawaii and the importance of it being one of our 50 states. 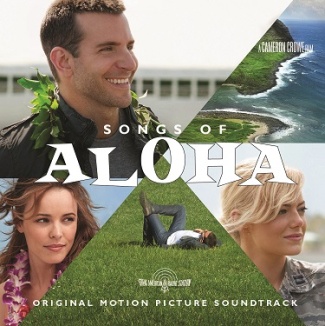 The film stars: Bradly Cooper, Rachel McAdams, and Emma Stone, some of my all time favorite actors. Also in the film are: Bill Murray, John Drasinski, Danny McBride and Alec Baldwin.

Bradley Cooper plays the role of a military contractor, Brian Gilcrest, that returns to the US Space program in Honolulu, Hawaii for a second chance. A second chance at his career, and possibly love.

His sweetheart from long ago at the base, Tracey (Rachel McAdams) and he reconnect when he returns to the base.
After time working with a young Air Force Captain, Allison (Emma Stone) he finds himself feeling attracted to her.

Watch a special 8 minutes of the film on facebook to get a sneak peak, and hear some of the traditional Hawaiian music. http://www.facebook.com/alohathemovie

I am looking forward to seeing this film, the sights and sounds of Hawaii, and of course the story. The music in a film gives us memories of a time and place, maybe a reminder of going to the movie and just taking a break from daily chores.


Giveaway: For you chance to win a copy of SONGS OF ALOHA original motion picture soundtrack, enter the rafflecopter widget. Open to residents of USA 18 and older. One random winner will be chosen and sent the CD from Sony.

Disclosure: I received a copy of Songs of Aloha from Sony. The comments and views are my own.