Sometimes it's easier to watch a video than write a intro, so here you go:
(why is there a video to the book? The film will be in theaters Sept)

There is nothing easy about this video-a man dies in a car crash.
Don was a family man.
He was married to Eva.
He had three children.
How will they cope with his death?
How will they be a family without him?
How will the community that loves him so much deal with his absence?

At the scene of his accident a man prays for Don, who is thought to be dead.
WAIT!!! Don is not dead. Did that prayer bring him back to life? I say yes!

Through much healing and emotion he is better, but he is ready to die.
His will is weak and tired.

I love the part when the church is filled with people praying for him to be well.
An entire congregation praying for him. That's the power of prayer! 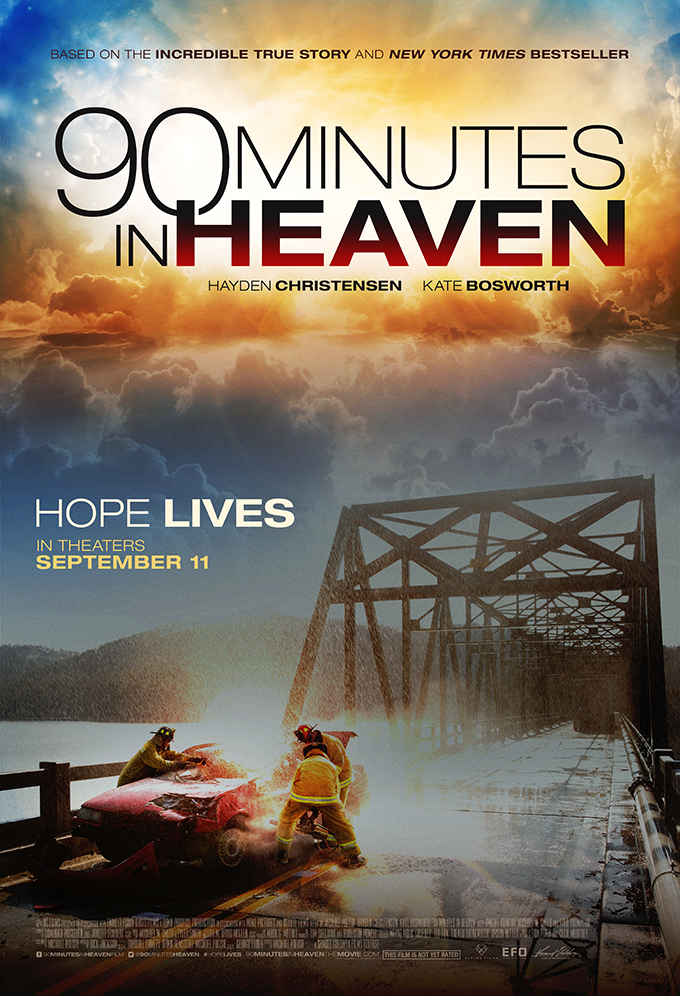 About the movie presented by Giving Films:
Releases in theaters everywhere September 11, 2015
Rating: PG-13 (for intense accident and injury images)
Starring Hayden Christensen (Star Wars: Episode II - Attack of the Clones, Star Wars: Episode III - Revenge of the Sith), Kate Bosworth (Remember The Titans, Blue Crush) Michael W. Smith, Fred Thompson, Dwight Yoakam, and Jason Kennedy, 90 Minutes In Heaven is based on the inspiring New York Times best-selling book that has sold 7 million copies.
About the book:
Paperback; 245 pages
Pastor Don Piper died January 18, 1989 when a semi-tractor truck crushed his car.  Declared dead by the first rescue workers to arrive on the scene, Don's body lay under a tarp for the next 90 minutes.  Don's soul, meanwhile, was experiencing love, joy, and life like he'd never known before.  Don was in Heaven.
When another pastor's prayers helped bring Don back to life, he became a living miracle!  Yet this is one miracle Don wished never happened.  Heaven's bliss was replaced by excruciating pain and emotional turmoil.
With the support and prayers of his beloved Eva, their three kids, and friends near and far, Don clings to his faith in God and fights to regain a semblance of his previous life.
The Piper family's incredible true story of perseverance and overcoming the challenges of life - and death - will bring hope and encouragement to all who see it.
Giveaway: Enter for your chance to win a copy of  the book:
90 Minutes in Heaven. One qualified random winner will be selected and sent the book.

OFFICIAL MOVIE WEBSITE
FACEBOOK
TWITTER
GIVING FILMS
About Giving Films:
Giving Films is passionate about sharing hope-filled movies and donating ALL of their profits to charities and ministries who serve those in need.  Beginning with their first film, 90 Minutes In Heaven, Giving Films is allowing all of us to be a part of making a difference.  Anytime you go to a Giving Films movie in theaters, visit http://www.givingfilms.com and select which charities you want to receive the profits from your ticket.  Their charitable organizations are Christian Alliance for Orphans, Faith Bridge Foster Care, Hire Heroes USA, Hope International, LifeWater, Street Grace, and World Vision.

Disclosure (in accordance with the FTC’s 16 CFR, Part 255: “Guides Concerning the Use of Endorsements and Testimonials in Advertising”): Many thanks to Propeller Consulting, LLC for providing this prize for the giveaway. Choice of winners and opinions are 100% my own and NOT influenced by monetary compensation. I did receive a sample of the product in exchange for this review and post.