Happy Valentine's Day, which really could be a week long celebration because who doesn't love some love, red roses, red hearts, and candy all week.
It's the first big holiday since Christmas and those Winter days of darkness at 5 PM on the East Coast can lend to longer days of sunlight anytime now, but movies are great medicine to rid those dreary days.

Do you ever say this while you are watching television and a movie trailer is shown that sparks your interest, but your like, ah I'll wait until the DVD comes out...

One of those films I said that to is DADDY'S HOME 2 and it is now available on  DVD February 20, 2018. Ah, relief from the television re-runs. There's nothing like a fresh new DVD and a comfy couch, am I right? 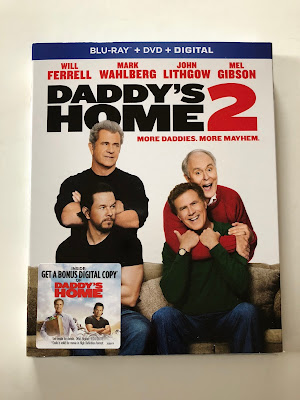 Daddy's Home 2 stars: Mark Whalberg, Mel Gibson, John Lithgow, and Will Ferrell. Do you have a favorite  star in that line up? I sure do, Mark Whalberg. I've dined at the famous Whalburger's Restaurant at their Philadelphia location. Yum and Yum! Plus I like his brother's television show too.

Daddy's Home 2 is about 2 dads that are co-dads. Yep, co-dads. So why are there 4 dads staring in this film? Those are the dads of the dads.
Take a look at the official Trailer:

Dads and Moms, here is the info you might want for viewing the film:

Was the film good? yes
Would I recommend it? yes
Is it funny? yes
Yes, you should buy both DVDs.

So, right now you can get the digital version and then on February 20, 2018 buy the combo pack of Blue-Ray + DVD + Digital. Hey, it might snow, ice storm or just plain rain all day and what a better way to spend the day inside is watching movies. Pick up Daddy's Home 2 and see how 2 dads and their 2 dads show off their parenting skills.

Wait, did you see Daddy's Home? The original film? It's available for purchase on the same day as Daddy's Home 2 is out. Get 'em both for a movie fest.

Here is some officialness about the film:

WILL FERRELL AND MARK WAHLBERG STAR IN THE
DADDY OF ALL FAMILY COMEDIES!

When it comes to raising their kids, Dusty (Mark Wahlberg) and Brad (Will Ferrell) finally have this co-parenting thing down.  That is, until Dusty’s macho dad (Mel Gibson) and Brad’s sweet-natured father (John Lithgow) come to town, throwing the whole family into complete chaos.  As old rivalries create new problems, Dusty and Brad’s partnership is put to the ultimate test in this hilarious and heartwarming comedy that gives new meaning to the term ‘blended family.’

The DADDY’S HOME 2 4K Ultra HD Combo Pack and Blu-ray Combo Pack feature over 45 minutes of bonus content.  Go behind the scenes with five featurettes, deleted/ extended/alternate scenes and a hilarious gag reel.  Plus, for a limited time only, get a bonus digital copy of the original Daddy’s Home with the 4K Ultra HD & Blu-ray Combo Packs.  In addition, the DADDY’S HOME 2 Blu-ray and 4K Ultra HD discs boast a Dolby Atmos® soundtrack remixed specifically for the home theater environment to place and move audio anywhere in the room, including overhead and the 4K Ultra HD disc features Dolby Vision™ high dynamic range (HDR), which delivers greater brightness and contrast, as well as a fuller palette of rich colors*.

Disclosure: I received a copy of Daddy's Home 2 for the purpose of this post.
The comments and views are my own.