TAD, The Lost Explorer and the Secret of King Midas GIVEAWAY

Get ready for exploration and adventure with TAD, The Lost Explorer and The Secret of King Midas because the Digital version and DVD will be available beginning April 10, 2018.

This newest film of TAD's adventures is a follow up to the 2013 hit, Tad, The Lost Explorer.

Tad Jones is a construction worker, he might like his job just fine, but he daydreams of being an explorer at heart. Tad Jones really could change his name to Tad Explorer. As fate may have it, Tad is invited to attend Sara Lavrof''s unveiling of her latest discovery- the papyrus that proves the existence of the Necklace of King Midas. Remember King Midas, he is the one that everything he touches turns to gold.

Well, watch out because a billionaire snatches Sara and has her helping him to find the enchanted talisman.  Tad already has a crush on Sara, she is cute AND an Archaeologist, so he sets off to rescue Sara from the evil billionaire who only wants gold.

Tad doesn't travel alone or lightly on his rescue mission-he has the Mummy of Paititi and his dog Jeff along for support and sleuthing. Oh, and Sara's pet bird also joins in the rescue mission. These three characters, the mummy, dog, and bird will have you laughing and wondering if they'll ever catch up to Sara and the greedy billionaire.

Tad and Sara are true explorers and their trip around the world will have you laughing at their adventure even though it's a serious mission to save Sara.

A few helpful points on the film for parents to consider:

Enter the giveaway for your chance to win a cool hat like Tad wears, and other goodies in this photo for some backyard exploration and imagination of your kids own adventures. One random name will be chosen and contacted by email. (must be 18 or older, no Post Office box address, and be a resident of contiguous USA) 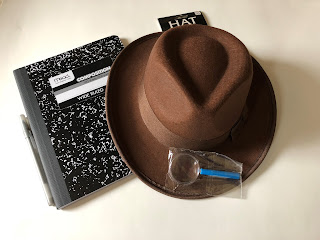 
Disclosure: I was sent promotional items for this post from Paramount. The comments and views are my own.