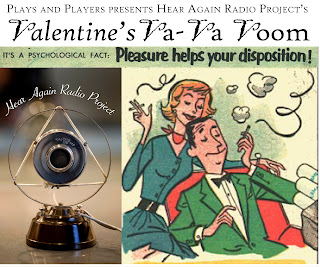 Philadelphia, PA - Plays & Players presents Valentine’s Va-Va-Voom, a special Valentine’s Day themed presentation by the Hear Again Radio Project.  The featured episodes are “Puppy Love” from the show Our Miss Brooks and “Blondie Gets a Valentine” from Blondie.

Stepping inside the historic Plays & Players building is the beginning of a trip back in time.  The Hear Again Radio Project presents classic radio dramas as they were originally broadcast with live Foley sound effects and the same commercials that would have aired with the shows.   Adding a visual element, the actors also appear in period costumes and on a period set, making the whole experience one of another era.

Our Miss Brooks was a situation comedy originally aired on CBS in 1948 about the adventures of Connie Brooks, a high school English teacher.  It was immensely popular throughout its run and made the career of its leading lady, Eve Arden.  Blondie, which began in 1939, followed Blondie and Dagwood Bumstead through the comic trials and tribulations of married life.  It was based on the comic strip of the same name which began in 1930 and is still in print.

Plays & Players (P&P) is at once 100 years old and 3 years old, having recently changed from a community theatre to a professional theatre focused on supporting and nurturing the work of local artists through performance and development. It hired its first Producing Artistic Director, Daniel Student, in its organization’s history, and has reached a level of prominence for the growing quality of its productions as well as its ability to launch the careers of some of the city's most talented performers. One of the hottest companies in town, and winner of Philadelphia Magazine’s “Best In Philly” award two years in a row, Plays & Players has become a rare place where a rich past meets an exciting present. Please visit us at www.playsandplayers.org.