Jack Skuller, a New Jersey native and 16 year old hearthrob-in-the-making has lended his talents towards helping the victims of Hurricane Sandy. Adding his own twist to the Christmas classic, Rockin' Around The Christmas Tree, all proceeds from the single will benefit the Hurricane Sandy NJ Relief Fund.
Since the release of his debut single Love Is A Drum, Skuller has been making waves in the press being deemed a "mini Jack White" by the New York Post and Teen Vogue's "new favorite singer songwriter". Combining equal parts passion, vintage rock vibes and pure pop sensibilities, Skuller's unique sound continues to impress fans and critics alike.

To Purchase go to his web site 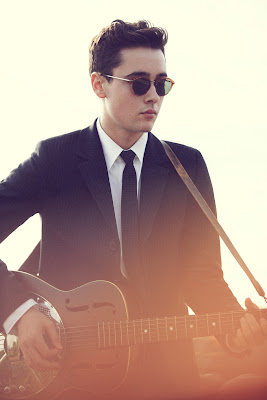 More on Jack Skuller:
Jack Skuller (born Jack Nathan Skuller on January 26, 1996) is an American rock and pop singer/songwriter, musician and recording artist. On June 21, 2012 it was announced that Skuller would participate in Radio Disney’s N.B.T. (Next BIG Thing) Season 5 multi-platform talent contest.

A demo of “Love Is A Drum” was produced by Daniel Rey, known for his work with the punk band the Ramones. The recording featured Nada Surf drummer Ira Elliot. Hoboken, NJ indie label Bar/None Records released the rockabilly tinged song as a limited edition single on April 20, 2010. The Examiner called it “arguably the best single released by anyone this year.” The New York Post called Skuller “a mini Jack White.”
Skuller made his television debut performing “Love Is A Drum” live on FOX TV’s Good Day New York on September 2, 2010.

In 2012, Skuller was featured on Channel One News seen by 6 million students across the United States.

On May 8, 2012 Skuller was invited to perform to over 700 New York area high school students at GRAMMY Career Day sponsored by the GRAMMY Foundation.

In July 2012, Skuller was the musical guest in the first episode of Meow Meow Music, a series on Amy Poehler’s youtube network Smart Girls Channel. Skuller is also a regular guest performer with the acclaimed bi-monthly tribute series The Loser’s Lounge held bi-monthly at Joe’s Pub in New York City.

In October 2012, Radio Disney N.B.T. will release Skuller’s songs “S.U.R.E.” as well as a re-record of “Love Is A Drum” on Walt Disney Records. The songs are produced by Zack Odom and Kenneth Mount known as ZK Productions whose credits include Cartel, Mayday Parade, All Time Low and the Ready Set.
Skuller describes his sound as ‘vintage-pop’ with a mixture of classic rock-and-roll. “You hear pop in the lyrics, like a Beatles kind of pop, and then the melodies go from 50’s influences to The Black Keys.”
at November 20, 2012