It's only days away!!!  Don't forget to tune into History Channel on March 3, 2013. (check your local listing for times)
Airing on 3.3.13 on History Channel, Mark Burnett has called this his biggest & most important project to date! Receiving support from superstars such as CeeLo Green and Blake Shelton to religious leaders such as Joel Osteen and Bishop T.D. Jakes and even the likes of Maya Angelou, this will without a doubt be a must-see television event!
THE BIBLE, premiering March on THE HISTORY CHANNEL, includes stories from Genesis to Revelation. It is being brought to television by the producing team of Roma Downey (Touched By An Angel) and Mark Burnett (The Voice, Survivor, Celebrity Apprentice).
"The Bible is such a remarkable and inspirational book," they said, "that we believed it deserved to be presented in a fresh way through powerful and moving filmmaking." 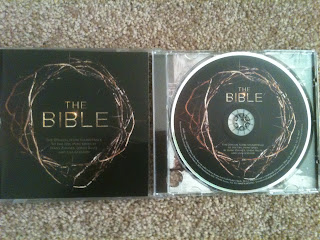 closed/Giveaway: Leave a comment on this post for your chance to win The Bible Series CD – Official Soundtrack pictured above. *This project was scored by award winning composer Hans Zimmer (Gladiator, Batman, Pirates of the Caribbean). One comment will be chosen by random.org. You have until March 5, 2013 12 midnight EST. to leave comments. Tune in on March 3, and leave a second comment about the show. Open to residents of the USA. Winner will be sent CD from marketing company.
join the conversation
https://www.facebook.com/BibleSeries

Disclosure: CD provided by Grace Hill Media and The Bible.
The comments and views are my own.
at February 25, 2013