THE SOUND OF MUSIC 50th ANNIVERSARY EDITION IS HERE, AND it's even better than I remember!!! 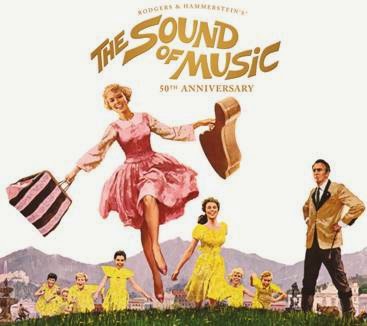 Oh yes It's here!!! The Sound of Music 50th anniversary Legacy Edition.
MY FAVORITE THINGS. What a wonderful song-gets you out of those down moments in a heart beat! Julie Andrews is lovely.

Another of my favorite songs is CLIMB EVERY MOUNTAIN. I'm just going to say all the songs are my favorite. The Sound of Music is the most in depth story I can ever remember as a child. What a special treat to watch it on television as a young child. So many aspects of this families life of being Motherless, the war, the hiding, the true strength of family. And of course the love story. Don't your just love when the Captain sings Edelweiss.

Maria. Captain Von Trapp, and his children with their singing voices can make you just want to run outside and find a mountain to sing your heart out! So do it!

The Sound of Music 50th Anniversary CD is as good as it gets. It's wonderful.
It's like a childhood memory flooding back with warmth and love. Something to hold onto and cherish. Everyone should own The Sound of Music so they can experience the wonder even if you haven't seen the film, get the CD!!!

SO LONG, FAREWELL, the bedtime song the children sing to the guests as they head off to bed shows the respect they have for their father. There are no arguments or tantrums on the steps as they leave the party.


The CD comes with a booklet with images from the movie, Julie Andrews on the songs of Rodgers and Hammerstein, The Sound of Music Score, and the cast.