Fathom Events invites you to experience a world class ballet show on the big screen when The Royal Ballet’s La Fille Mal Gardee is screened at select cinemas nationwide on 5/5.
This show is one day only on May 5, 2015 at participating theaters in New Jersey Clifton, Paramus, Hazlet, North Brunswick, and Edgewater.
Enter now to win a pair of passes to the event. 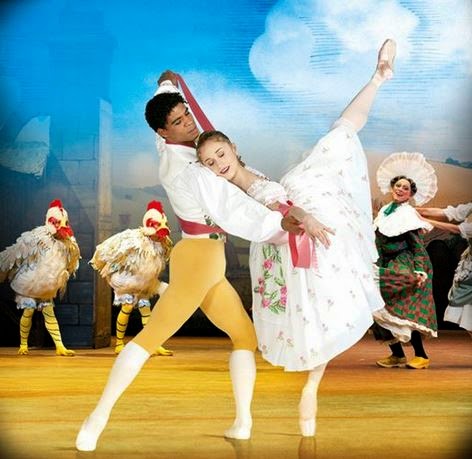 enter for chance to win passes to see the ballet on
5/5     LA FILLE MAL GARDEE (Ballet) – 7:00PM
La Fille Mal Gardee – from the Royal Opera House London
Frederick Ashton's final full-length ballet is one of his most joyous creations, inspired by his love for the Suffolk countryside. It is based on an 1828 French ballet and the music was adapted by John Lanchbery from Ferdinand Hérold's original score. La Fille mal gardée was a resounding success on its premiere in 1960 and has remained a firm favourite in The Royal Ballet's repertory. The title translates as 'The Wayward Daughter'. La Fille displays some of Ashton's most virtuosic choreography – the youthful passion of Lise and her lover, Colas, is expressed in a series of energetic pas de deux. The ballet is laced with good humour and a whirl of dancing chickens, grouchy guardians and halfwit suitors take to the stage. Ashton affectionately incorporated elements of national folk dance into his choreography, from a Lancashire clog dance to a maypole dance, making La Fille mal gardée (despite its title) The Royal Ballet's most emphatically English work. Osbert Lancaster's colourful designs reinforce the robust wit of the production.