MATILDA THE MUSICAL will be in Philadelphia November 17-29, and Yes, tickets are on sale NOW!

A long time favorite story in our house is Matilda, and even now we still catch a few minutes of it here and there searching channels. A great story of a little girl who becomes and avid reader, enough so she can let her teacher-Miss Honey adopt her right at the moment her parents and brother are on the run from the officials since Matilda's dad does some shady car business dealings.
The dark, dreary school Matilda attends is headmastered by Mrs. Trunchbull, who happens to be Miss Honey's Aunt. The headmaster is very mean and doesn't even like children. Matilda finds her way to bring laughter and fun to the classroom at Miss Trunchbull's expense. There are flying children, newts in her drinking water, a boy that eats too much cake, and a host of other exciting events.
Miss Honey is a wonderful teacher and Matilda and she become special friends trying to trick Mrs. Trunchbull many times at school and at her home. 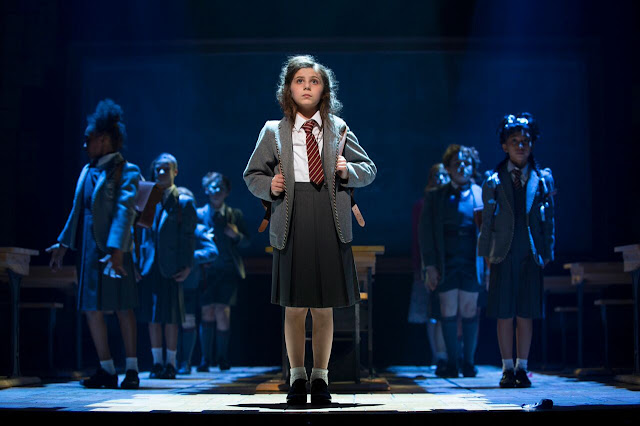 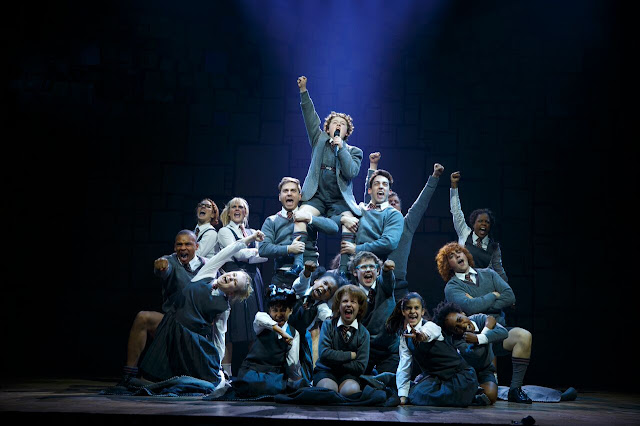 Matilda is coming to Kimmel Center's Academy of Music in Philadelphia!
Tickets are on sale now!
Call (215) 893-1999 or visit www.kimmelcenter.org, or at the Kimmel Center box office. 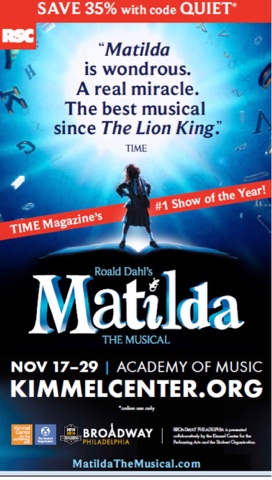 First National Tour Makes Philadelphia Premiere at the
Kimmel Center’s Academy of Music
November 17-29, 2015
Broadway Philadelphia presents TIME Magazine’s #1 Show of the Year, Matilda The Musical, at the Kimmel Center’s Academy of Music November 17–29, 2015.
"REJOICE. It is even more glorious than promised.” - New York Times
“WELCOME TO THE DELIRIOUSLY AMUSING, HEARTWARMING, HEAD- SPINNING WORLD OF MATILDA THE MUSICAL. YOU WON’T WANT
TO LEAVE.” – Bloomberg News
TIME Magazine’s #1 Show of the Year! Winner of 50 international awards, including four Tony Awards®, MATILDA THE MUSICAL is the story of an
extraordinary girl who, armed with a vivid imagination and a sharp mind, dares to take a stand and change her own destiny.
Based on the beloved novel by Roald Dahl, MATILDA continues to thrill sold-out audiences of all ages on Broadway and in London’s West End. The Wall Street Journal says, “The makers of MATILDA have done the impossible – triumphantly! It is smart, sweet, zany and stupendous fun.”
www.matildathemusical.com/tour
www.matildathemusical.com
@MatildaBroadway
www.facebook.com/MatildaOnBroadway
MATILDA THE MUSICAL
Academy of Music at the Kimmel Center

Disclosure: I was given Press Passes to Matilda the Musical for the purpose of this post. The comments and views are my own.
at November 03, 2015