The BOOK CLUB film is more of a girlfriend club with some romance to discuss.

What to do on a Saturday afternoon when everyone is out of the house? Watch a DVD! - that's my plan. Having recently, as in a few days ago received a DVD to review titled BOOK CLUB from Paramount, I loaded up the Blu Ray player and I settled in for me time...

Uninterrupted, unplanned, no popcorn, no phone calls, no dryer buzzing, just me watching a film I wanted to see since it was in theaters. 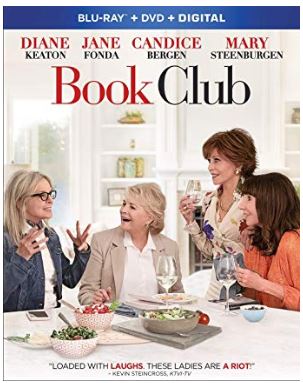 
You know those girlfriend conversations that only you and  your best girlfriends understand because you've got history. There is history with this bunch, not just book club conversations, but true friendship bonds.
I've have a few best girlfriends, I haven't seen them much lately, due to caring for an ill member of my family, but we do keep in contact by texting for now. This film made me think of my girlfriends all through the movie, and that's a good thing.

BOOK CLUB is a means to Friendship Club and finding out what's on the other side of being a wife, mom, or girlfriend to someone. It's about finding out each of these characters love for each other and their own lives. Sort of like coming back around to the life you had before getting to your 50's, but way better.

join the conversation about the film: BOOK CLUB