Set to release on October 26, 2018, HOLY ROAR, the newest CD by Chris Tomlin will be available.
On October 23 a companion book will also be available- Holy Roar: 7 Words That Will Change the Way You Worship set for October 23. 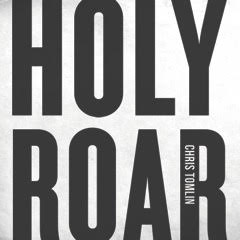 Chris Tomlin is a acclaimed singer and songwriter who has sold tons of albums, received many awards and recognition for his work as a songwriter and singer.
He shows people how to worship through singing, he is a worship leader.
Starting at a young age playing the guitar, his love for music continued through college and has lead him to church worship, and leading his own church in worship. Hop on over to YouTube to see and hear what makes people enjoy his music and worship.

Chris Tomlin is one of the most heralded singer-songwriters in the world who has amassed an impressive body of work. He has sold more than 8 million albums, 11.3 million digital tracks with 16 #1 singles.

Chris is one of only four artists ever to receive the Sound Exchange Digital Radio Award for over 1 Billion digital radio streams, others include Justin Timberlake, Pitbull and Garth Brooks.

This spring, Chris marked another career milestone by launching his own imprint record label, Bowyer & Bow, in partnership with Capitol Christian Music Group.

GIVEAWAY: This giveaway is open to residents of the continental U.S. only. Be sure to read the disclosure statement at the end of this post.

ENTER THE RAFFLECOPTER WIDGET ON THIS POST FOR YOUR CHANCE TO WIN HOLY ROAR CD BY CHRIS TOMLIN. (the companion book is not part of this giveaway, only the CD)
ONE RANDOM WINNER WILL BE SELECTED AND NOTIFIED BY EMAIL.

“Disclosure (in accordance with the FTC’s 16 CFR, Part 255:  “Guides Concerning the Use of Endorsements and Testimonials in Advertising”):  Many thanks to Propeller Consulting, LLC for providing this prize for the giveaway.  Choice of winners and opinions are 100% my own and NOT influenced by monetary compensation.
I did receive a sample of the product in exchange for this review and post.
Only one entrant per mailing address, per giveaway.  If you have won a prize from our sponsor Propeller /FlyBy Promotions in the last 30 days on the same blog, you are not eligible to win.  Or if you have won the same prize on another blog, you are not eligible to win it again.  Winner is subject to eligibility verification,