This month we are spending a few weeks at a mountain campground with our Airsteream travel trailer. It's a nice break from the day to day routine of our lives.  Although my husband is still doing his office job with the help of the campground wireless fidelity, we are finding some down time.  I'm sitting under the canopy of the trailer, a nice breeze is flowing, and the view of pine trees and a few scattered picnic tables is good for the soul.

Last night we huddled up on the couch to watch The SPONGEBOB MOVIE: SPONGE ON THE RUN. I say huddled because the couch is size for a travel trailer, not a living room.

My youngest daughter who was 5 years old in 1999 was so excited to see the television show: SPONGEBOB. It was advertised for weeks before it aired on Nickelodeon and she was tuned it for it's first episode. My husband soon became a fan of the cute optimistic SPONGEBOB. In 2021 they both are still watching SPONGEBOB.

In this Latest movie:  SPONGE ON THE RUN, SPONGEBOB must rescue his pet snail Gary. Gary has been taken and is now in the hands of  King Poseidon. Patrick and SPONGEBOB set out on a fantastic mode of transportation that Sandy Checks has rigged up for the crew to head to the Lost City of  Atlantic City.

Along their quest, they meet up with a tumbleweed named SAGE (Keanu Reeves) who gives them a challenge coin that as they complete the challenges they will be lead to Gary.

SpongeBob 3-Movie Collection on Blu-ray or DVD is now available for purchase.

Run time is 91 minutes for the movie.

Bonus Features have their own run times.

The movie was really cute, full of friendship, optimism, and team work. SPONGEBOB seems to find the good in everyone and never doubts that anyone he comes in contact with would be unfair. 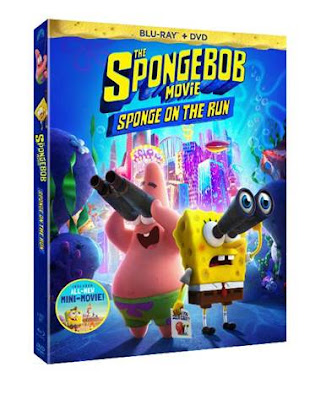 SpongeBob SquarePants, his best friend Patrick, and the Bikini Bottom gang star in their most epic adventure movie yet! When SpongeBob’s beloved pet snail Gary goes missing, a path of clues leads SpongeBob and Patrick to the powerful King Poseidon, who has Gary held captive in the Lost City of Atlantic City. On their mission to save Gary, SpongeBob and his pals team up for a heroic and hilarious journey where they discover nothing is stronger than the power of friendship.

Buy your copy today and enjoy the scenery of  the ocean, the fun characters of Bikini Bottom, plus all the extra features on the disc.